Tuesday of Week 10, 29 GCC triathletes competed in the annual ‘Roberts Road Triathlon’. Conditions were fantastic, not too hot in overcast conditions and the roads staying dry for the bike leg despite the 90% predicted downpour.

Our students were very competitive with several finishing in 1st place and all GCC competitors finishing at the front end. Results from this event will be available and posted in the next sports report.


This year the SCISSA Rugby 7s competition commences in Term 2, Week 3, on 2 May. GCC will be entering an Intermediate Boys team that will compete in competition on Wednesday afternoons against Pacific Lutheran College, Immanuel Lutheran College, Suncoast Christian College, Good Shepherd Lutheran College and St Andrews Anglican College. GCC teacher, Mr Carolissen will be using his vast rugby union knowledge and experience to coach this team. Games will be held at the Beerwah Bulldogs RL fields and at St Andrews Peregian fields. GCC’s team is listed below. Any other students interested in playing in this competition should email Mr Beattie. Likewise, if you are no longer available to play you should notify Mr Beattie.

Incredibly, GCC will have six teams competing in Grand Finals on Wednesday in Week 10. This means we have six teams playing out of the eight separate age divisions we competed in this term. Congratulations to all of our players on this fantastic accomplishment. These finals will be held at Nambour Christian College at the following times.

Final Standings prior to the Grand Finals this week are listed below:

The GCC 11/12 SCISSA Football (Soccer) team were successful in making the Grand Final against Pacific Lutheran College. PLC has made the last five Grand Finals and won the last three.

The lads took it up to Pacific Lutheran College and Reece Dahm opened the scoring to lead 1-0. PLC replied 5 minutes later with a classy goal. 1-1 at halftime.

Then the remnants of cyclone Nora hit. A torrential downpour ensued and the wind howled giving Pacific Lutheran College a distinct wind advantage. The lads dug in, but the rain and wind made us have to defend for virtually the whole second half. Pacific Lutheran College took a long range shot outside the 18 yard box, Dom Ruhle (GK) had it covered, but a cruel deflection off Reilly Becker’s shin had the ball end up in the top corner. GCC then attacked for the last eight minutes but were denied by the Pacific Lutheran College goalkeeper and backs on numerous occasions. A heartbreaking loss 2-1. Best players: Harry Fullerton; Dom Ruhle; Shane Charlesworth; Ronan Martin.

Thank you to our Year 12s: Harry, Shane, Nick, Thomas, Reilly and Astonn for their contribution to GCC Soccer over the last seven years. They deserved a win, but sometimes there are no fairytales in football. Joshua Collins and Caitlin Moore recently competed in the QLD State Swimming Championships. Joshua managed to swim four personal best times and his best result was an 11th placing in the 50m Breast stroke. Unfortunately, he only missed out on the final for this event by 0.03.

Caitlin Moore swam quite well considering she suffered from a terrible cold the day before states. She came 16th in the 400m freestyle, 14th in the 200m backstroke and 13th in the 100m backstroke. Caitlin tied in 10th place in the 50m backstroke, so she had to do a swim-off. The result of the swim off was that she came 2nd by 0.08 milliseconds and was a reserve for the final. Congratulations to both Caitlin and Joshua on these fantastic efforts.

GCC’s Year 10 Volleyball teams have been competing in the Trish Buckley Volleyball tournament this term. The boys put up a valiant effort to finish in 2nd place. Thank you to Year 8 student Mason White for filling in on the last week of competition. The Girls also played very well to finish in 3rd place against some classy opposition. The last game vs Burnside was a nail biter with our girls winning the 2nd set but unfortunately just losing the game overall on total points.

Great leadership is rare in Australian Cricket these days!

Well done to our Middle School House Captains who over the last few weeks have shown great leadership by organising and implementing their very own inter house cricket competition. The games were a success with good skills on display and entertaining close matches.

Upcoming is the GCC Cross Country Carnival taking place in Week 1 of Term 2, 20 April. A group of Primary and Secondary students have been training on Tuesday and Thursday mornings from school. This will continue in Term 2 until the District Cross Country event. The Easter holidays are a great opportunity for students to prepare. It is amazing how much your fitness and running time will improve if you find time for two or three runs a week. So find the time and surprise your friends on Friday in Week 1.

The Senior SCISSA Volleyball will commence in Week 2 of Term 2. GCC teams are looking competitive with strong teams listed in each of the four divisions. Games will be played on Wednesday afternoons and home games will be played at the Student Centre at Beerwah State High School. GCC will provide a bus for teams traveling to away games. Teams are listed below. Players no longer able to participate should notify Mr Beattie via email ASAP. Likewise, any students who missed the nominations and would like to play should contact Mr Beattie. 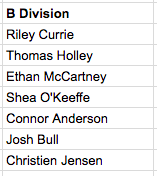