Jaymes to swim at Nationals!

Jaymes placed fourth in the 12 year-old-boys’ 50m freestyle and swam a qualifying time for Nationals. Jaymes had a very busy carnival and swam in several events making finals in every event. He was also a member of the Sunshine Coast 200m Freestyle Relay which won a bronze medal. Jaymes also won bronze in the 200m Medley Relay which was another highlight for him.

Freestyle finals and achieved new personal best times in these races. He also won bronze in the 12-year-old-boys’ 200m Freestyle Relay with Jaymes Roser, so our GCC boys were half of the Sunshine Coast team.

Caitlin Moore swam in five events at the State Champs and swam mostly personal best times even with the heavy head cold she had during the carnival. Caitlin tied 10th in 50m backstroke heats and then had a swimoff placing second so she didn’t make the final but swam a great time in the swimoff. Her time would have placed her in fifth place in the final. Both Caitlin and Josh are enjoying competing in the longer races from 100m to 400m. Indiah Loveday enjoyed the experience of competing in her first State Championship and narrowly missed qualifying for the final of the 12 Girls 50m backstroke. She was also a member of the Sunshine Coast 200m freestyle relay team which won bronze. 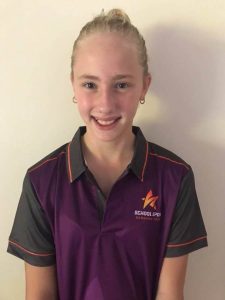